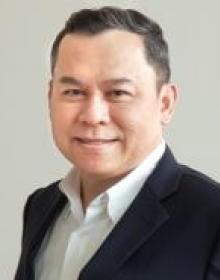 I was a student in Survey and Data Science at the University of Michigan-Ann Arbor and received my master's degree in 2004. I studied at the University previously at several of the Summer Institute in Survey Research Techniques sessions, where I earned certificates in survey sampling and focus groups before joining the master's degree program.
During my studies in the degree program, I was an intern on a number of research projects. I participated in a survey cost modeling project, assisted with the design of the National Survey of American Life, and conducted methodological research for a national survey of instructional improvement conducted by the Consortium for Policy Research in Education (CPRE), a combined effort of five leading research universities (Harvard, Stanford, Pennsylvania, the University of Michigan, and the University of Wisconsin).

Before joining the Program in 2002, I worked at Assumption University in Bangkok, Thailand, where I directed the ABAC Poll Research Center. After graduation in 2004, I returned to my position at Assumption University, where I continued to direct the ABAC Poll till 2009. In 2010, I attended another master’s in Public Administration at Cornell, then, I transferred to Georgetown master’s in Policy Management. I graduated from Georgetown in 2014. In 2019, I was appointed to be Assistant Professor and CEO at UCSI Poll Research Center, UCSI University, Kuala Lumpur, Malaysia.

Today, I am holding some selective positions including a honorary director in statistics at Thailand’s National Statistical Office (NSO), managing director of Super Poll Co.Ltd., and Chairman of Research Institute for Community Happiness and Leadership located in Mahidol University, Thailand. Currently, I am working on another master’s in Cybersecurity and Risk Management at Georgetown University, Washington, D.C.
As MD at Super Poll in Thailand and CEO at UCSI Poll Research Center in Malaysia, I am applying survey methodology and data science for conducting many research projects in Thailand and Malaysia. For example, I am conducting public opinion polls on politics, economics, and social issues in both countries. However, I am mainly working In Thailand, I am research project director for Thai government and private agency studies (e.g., Thailand’s National Statistical Office, Ministry of Public Health, Digital Government Development Agency, Ministry of Digital Economy and Society, and The Office of Small and Medium Enterprises Promotion). I also specialize in surveys on consumer's satisfaction with marketing strategies and evaluation research, and conduct surveys on cybersecurity, crime, drug abuse, and the quality of Thai youth. My master's studies have allowed me to expand my research interests in these studies in methodological areas and data science such as survey participation, total survey errors, and cybersecurity.

My success story is about Thailand referendum prediction poll in 2016 that was conducted by my Super Poll. The poll results predicted that 61.5% of total voters would approve the new constitution, and the actual vote was 61.4%. The poll was released about two weeks prior to the referendum day. The sample size was 1,452 respondents out of over 50 million eligible voters in the country.
I received a PhD in Computer and Engineering Management from Assumption University, and Thammasat University earning a master's degree in sociology in 1994. I have a bachelor's degree in political science from Ramkhamhaeng University and a bachelor's degree in Philosophy (1st honor) from Saengtham College in 1990. My wife and son are living in Bethesda, Rockville, Maryland. My son’s dream is to say “M Go Blue”. He is a 12th grader at Walter Johnson High School.